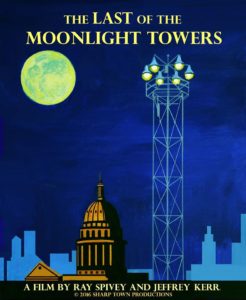 Before neurology there was another subject that piqued Dr. Jeffrey Kerr’s interest.

“I have always loved history,” he said.
And not just any history. In addition to being an expert in ADHD, seizures and headaches, Dr. Kerr also specializes in Texas history. In fact, he’s authored several books about events from Austin’s past and most recently co-produced a movie called The Last of the Moonlight Towers with another local, Ray Spivey.

What first sparked his interest in digging into our region’s past?

Described Dr. Kerr, “My interest in Austin history was kindled by the story of Mirabeau Lamar shooting a large buffalo in 1838 at what later became the corner of 8th Street and Congress Avenue.  After the hunt he and the other men gathered on the hill on which the Capitol now sits and Lamar told everyone that “this shall be the seat of future empire!”  Austin was founded (with a push from Lamar, who by then was president of Texas) a few months later.”