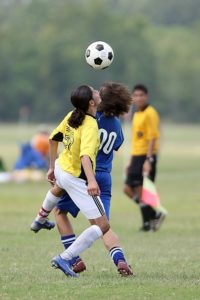 With kids and teenagers back on the field (following a very tumultuous year), there is likely to be a rise in youth concussions.  Pediatric Neurologist and Sports Neurologist Dr. Kate Labiner shared on the subject in a recent interview: What are the most typical causes of concussions for younger recreational athletes?  Sports are definitely a

We are still in the thick of the fall sports season here in Central Texas with football and soccer, and that means it’s prime time for concussions, too. While boys and girls who play sports are equally at risk for suffering a concussion, a new study recently published in the Clinical Journal of Sports Medicine

Pop Warner youth football will look a little different when kids return to the field this September. The organization has called to end the traditional three-point stance in an effort to curb head injuries and concussions among young players. The position of placing hands on the ground and lowering the head in anticipation of snapping

New research shows that among all sports and age groups concussions are now the highest among high school girls who play soccer. Who knew? The study done by Northwestern University’s Feinberg School of Medicine reviewed data from nine sports during 2005-2015. Of the more than 40,000 injuries reported, 6,399 were concussions. Other findings include: In

The most comprehensive study to date on youth concussions will take place right here in our own backyard. The University Interscholastic League (UIL), the state’s governing body for public high school sports, is joining forces with the O’Donnell Brain Institute at UT Southwestern Medical Center to track brain injuries among young athletes. This will be

It’s almost fall, which means one thing in Texas…the return of football season. Football is played by kids of all ages around here, starting as young as five years old in some local Pop Warner and flag football leagues. Other popular fall sports include boys’ and girls’ soccer and basketball. All three sports involve a

A new study claims that the number of concussion injuries may be much higher than reported. This is because most children who suffer a concussion are not seen in a hospital emergency room where the injury is most often reported. Data from 8,100 children under the age of 18 were evaluated for the study. It found