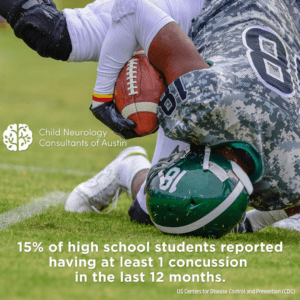 We all know that concussions are common in youth sports (with 15% of high school student-athletes reporting at least one in the last 12 months-CDC). Now as kids are returning to play in school and other organized sports following months off due to COVID-19, could there be a spike in the number of concussions we see?

Many experts believe that the lack of conditioning programs and sports camps permitted over the summer may have rendered kids less than physically fit to participate. Or perhaps they have been “training” themselves these past few months which is not quite the same as being under the guidance of a certified coach or trainer.

Those children and teens who are not in the best form prior to popular fall sports (like football, volleyball, and soccer) could be at an increased risk for many types of injury, including concussions. All it takes is one bad fall from being unsteady on the feet or a run-in with another player to jostle the brain and cause a traumatic injury.

According to Child Neurology Consultants’ pediatric neurologist and concussion specialist, Dr. Kate Labiner, “there is evidence to support increased concussions when people are de-conditioned and they have less neuronal reserve,” meaning their reaction times aren’t quite what they were during the season. She adds that another issue that may contribute to increased concussions is “poor healing when kids are or have been less active.”

Dr. Labiner recently commented on this regarding concussions and other injuries as kids return to fall sports for an article in Austin 360 (Austin American Statesman).

The University Interscholastic League (UIL) for Texas has declared it safe for smaller high schools to begin fall sports practices already with games scheduled as early as August 27.  Larger schools in the 5A/6A categories will begin games in late September.

If your child is resuming play or trying out a new sport this fall, it might be a good idea to consider ImPACT testing which evaluates cognitive abilities of the brain before they start. This establishes a baseline for comparison of brain function in the unfortunate event that they do suffer a concussion.

Some common symptoms to look for if you suspect a concussion include:

As soon as you suspect they might have a concussion, it’s best to get help immediately–or within the first 48 hours. Early diagnosis and intervention lead to the most effective care and treatment plan to ensure your child’s brain heals successfully.

For an appointment with one of our specialists or to learn about our current telehealth services, please visit us here.