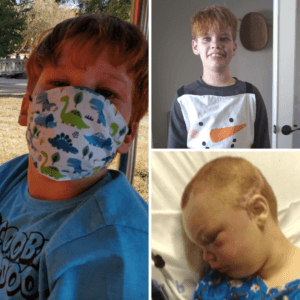 Twelve-year-old Mason Marlow was born with a reddish-purple discoloration on the face, known as a port-wine stain birthmark, which is a hallmark of Sturge-Weber syndrome, a rare vascular disorder that can cause progressive brain injury, epilepsy, paralysis and glaucoma.

At five months old, Mason started having seizures. His parents, David and Desirae, were referred to multiple neurologists throughout the state to try to find the right treatment for his complex condition. As active military members, it became clear that they would need help caring for Mason. That’s when his grandparents, Wayne and Cynthia, quickly stepped in to support Mason, and began the long journey of educating themselves about Sturge-Weber syndrome and advocating for a better quality of life for Mason.

With each seizure, Mason would have a noticeable regression in his behavioral and cognitive health, and with age, he became violent. After several years of psychologist visits and attempts at in-patient treatment facilities, Wayne and Cynthia contacted the Sturge-Weber Foundation and eventually during a hospital admission in Austin, they met pediatric neurologist Dr. Karen Keough from Child Neurology Consultants of Austin.

“Finding Dr. Keough was the best thing that ever happened to us,” said Cynthia. Because Mason’s seizures were not being managed by medication, Dr. Keough recommended he undergo a TOPS procedure, or a resection of the temporal, occipital, and parietal lobe of his brain on the side affected by his Sturge-Weber syndrome.

In January of 2020 at the age of nine, Mason and his family made the difficult but necessary choice to undergo surgery.

“Making the decision to take part of his brain out, and having to make that decision for him, was not taken lightly,” says Cynthia. “But it was the right decision. As scary as surgery is, it was his salvation. It’s allowed him to stop having seizures, and also to regain command of his emotions and actions.”

Dr. Keough monitored Mason’s seizures with video electroencephalogram (EEG) and ran additional tests to map out his motor and language function to be sure the surgery wouldn’t cause any severe cognitive deficits. Mason’s surgeon, Dr. Dhruve Jeevan, and Dr. Keough then presented his case to a group of neurologists to approve his surgical plan.

Since surgery, Mason has full seizure control on medication and has made incredible improvements in his behavior and learning. He is enrolled in regular classes at Navarro ISD, where he has a team of supporters who are willing to adapt to his needs.

According to Cynthia, Mason is a ray of sunshine, and is making a positive impact on many people’s lives. She says, “It’s rewarding to see where he came from to where he is now, and we have a lot of hope for his future.”

Mason’s family encourages families affected by rare medical conditions to reach out to the appropriate foundation and non-profits immediately to be connected with resources and support. The National Organization for Rare Disorders Resource Center provides patients and caregivers helpful information on a variety of topics for the rare disease community.

Child Neurology Consultants of Austin has experience treating a wide range of neurological conditions in children and teenagers from 0 to 21 years old. To learn more, please call 512.494.4000 or contact us here.