Perinatal brain injuries are suffered by an infant in the time right before or immediately following birth. Our Neonatal Neurology Program works closely with a comprehensive team of neonatal specialists to take extra special care of children born with serious brain conditions.

The most common is perinatal hypoxia, a deficiency of oxygen to the brain tissue before and after birth that causes a baby to stop breathing.

HIE is a type of brain damage that often leads to other complications like developmental or cognitive delays and disabilities, and motor impairments as the child gets older.

Other medical conditions associated with perinatal hypoxia include:

There are a number of reasons that a child does not get an adequate amount of oxygen at birth, the most common including: 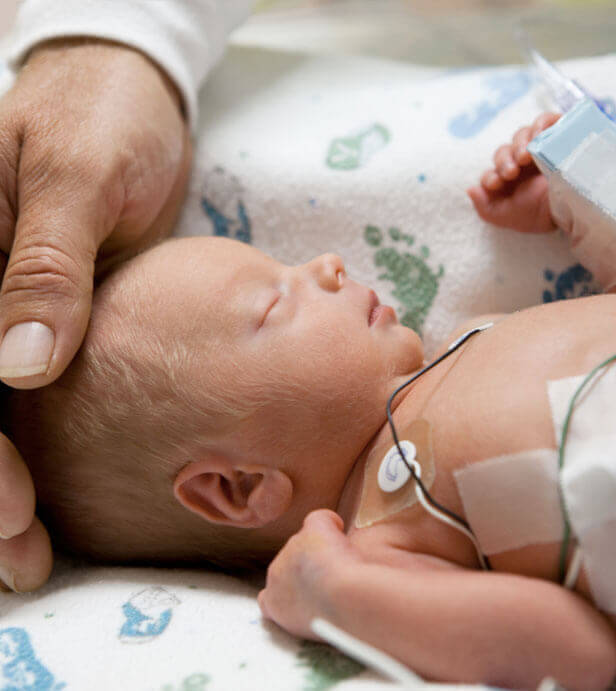 A diagnosis of perinatal hypoxia usually comes during childbirth or immediately following. Oxygen levels are monitored closely as soon as the baby emerges from the womb, and if any abnormalities are present, swift action will be taken.

Signs and symptoms of oxygen loss include:

Immediate action within the first six hours following birth is critical if oxygen loss is suspected.

Neonatal therapeutic hypothermia is the most common form of treatment used for perinatal hypoxia and can effectively reduce mortality rates and long-term neurological disorders by half.

The term hypothermia refers to freezing, and this treatment involves cooling the newborn’s body temperature in a very controlled environment with special ice blankets or an ice cap on the head to slow down cellular responses in the brain while oxygen can be administered. Once the oxygen level has reached normal amounts, the baby is gently warmed up and regular temperatures are restored.

Child Neurology Consultants of Austin is available for in-hospital or in-office evaluations of infants with HIE or other types of perinatal injury. The collective experience and knowledge of our group are unmatched in Central Texas. Call (512) 494-4000 to schedule an appointment or book an appointment now.